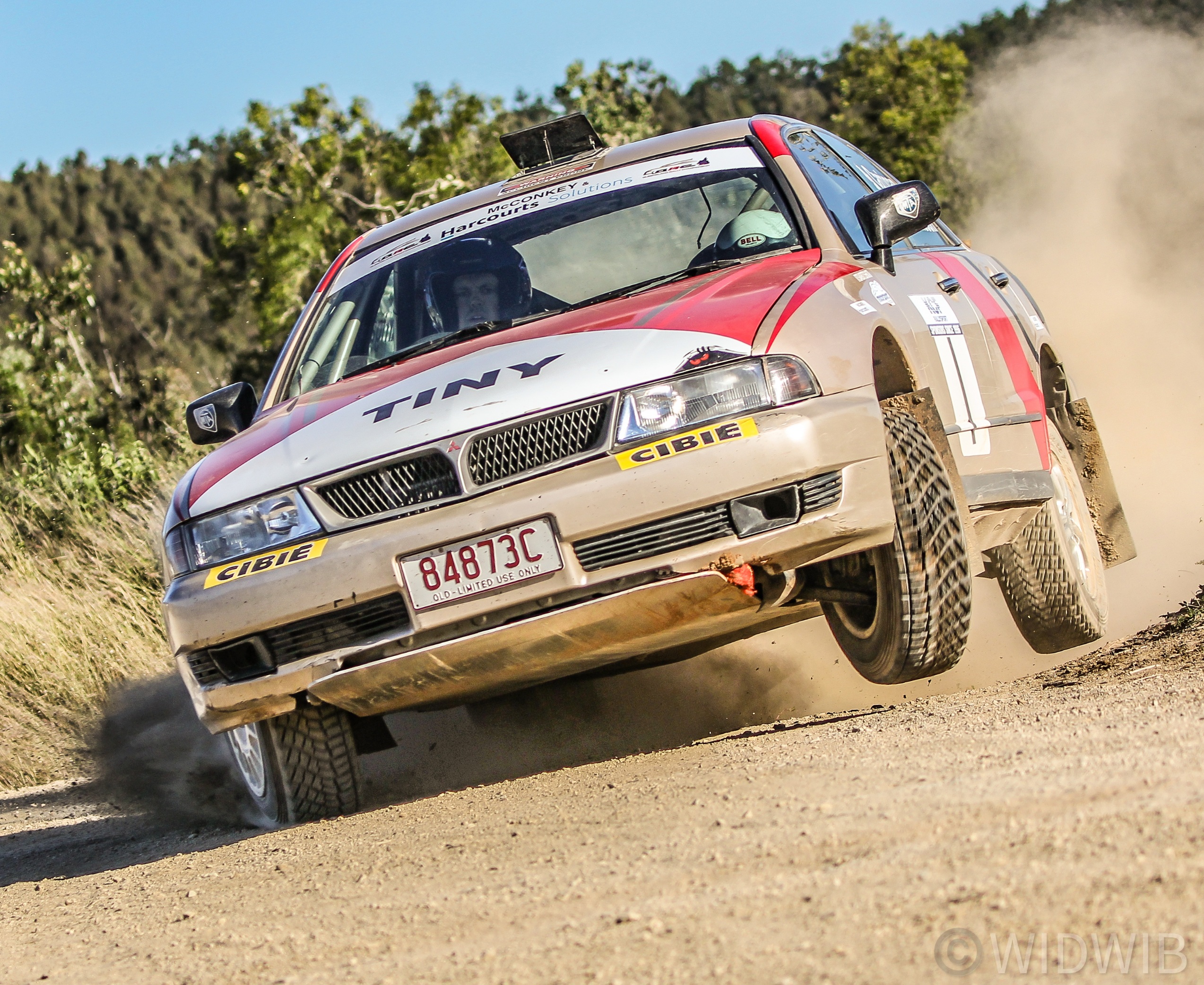 The KCF Rallysport Winter Stages were won by the Mitsubishi Magna dubbed “Tiny” driven by Tristan Carrigan and Jenny Prince of Inverted Motorsport.

The Benarkin-based Queensland event provided a battleground for the 43 strongfields. Run by the Brisbane Sporting Car Club, it was a low stress event with AB timing and rhythm. The format used two stages approximately 10 km long allowing the best 2 of 3 runs to be included in the results of Round 1, then combining the two stages for one long stage for Round 2. An optional test, and not included in the final results was the chance for the crews to run the long stage at night, providing valuable experience for many.

At the end of Round 1, the top 3 were a mix of 4×4, FWD and RWD. Leading Ronnie Bustard and Colin O’Brien, Mitsubishi Evo 9 – Glendun Group was in 19.53 just 2 seconds ahead of Tristan Carrigan and Jenny Prince, Mitsubishi Magna – Inverted Motorsport. The 19 behind them were Thomas Dermody and Ryan Preston, Ford Escort – APX Suspension. Unfortunately for the leaders, they sustained engine damage while attempting to complete a third pass of the stages in Round 1 and were unable to continue.

Onto Heat 2 which was a single 19 km stage, a combo of the two previous stages. The best stage time was set by Carrigan / Prince securing first place at the Magna. Dermody / Preston had a tire come off their rim and had to change stages, ruining their chances of placing. Richard Galley and John Andreatidis, Mitsubishi Evo 8 – Allied Timber Products, clocked a second best stage time in 10.27 seconds. This raised them to second place. Gill / O’Shea recorded the third fastest time in 10.35 seconds, finishing third in their Evo 3.

“I cut my teeth on these KCF events a long time ago and it’s a great way to start in the sport. It’s so good to see so many newbies and new faces here, ”Carrigan commented.

Inverted Motorsport wanted to demonstrate to the motorsport community that it is possible to build an inexpensive and competitive rally car. Publicly sharing many steps in the building process along the way and now showing the successes of their hard work. Tiny is a front-drive 3.8L Magna V6 that anyone can try to build.

“It would be great to see Tiny inspire some in the sport who otherwise wouldn’t get involved as competitors because they think a suitable rally car is too hard to find or too expensive to buy and drive. That’s why we picked a Magna, if a Magna can do it and be fun to drive, then any car can.

The event was also a round of the Next Level Creations Qld Novice rally series. With a record of 13 novice entries, the competition was going to be hot. Paul Jansen and Kester Ward, Subaru WRX GC8 – Turning Point Driving School, took victory in novice and also fifth. The duo and part of the rally community were working very hard to get the car ready on time, had no real expectations for the day and were incredibly happy with their result. Next are Nikki Duclos and Tony Arbon, Subaru WRX – Tripp Industries. Duclos only started motorsport in the

12 months and on the podium of his second rally. David Byrne and Jake Keleher, Datsun 240Z – Z Racing, were very close within 3 seconds of third place, coming from Rockhampton to compete.

The spectator point was very popular with over 80 people in attendance at one time. They had a lot of action to keep them entertained. The event was well received by the participants and the Benarkin community and could not have happened without the support of Benarkin State School, many volunteers and KCF Rallysport.

The next round of the Next Level Creations Qld Novice Rally Series will take place on August 7 at the SR Automotive Manumbar Rally, also a round of the Harcourt Solutions Qld Rally Championship.

The results are available at www.bscc.asn.au

How to shoot motorsports with a monopod: get sharper shots without pain in the arm!