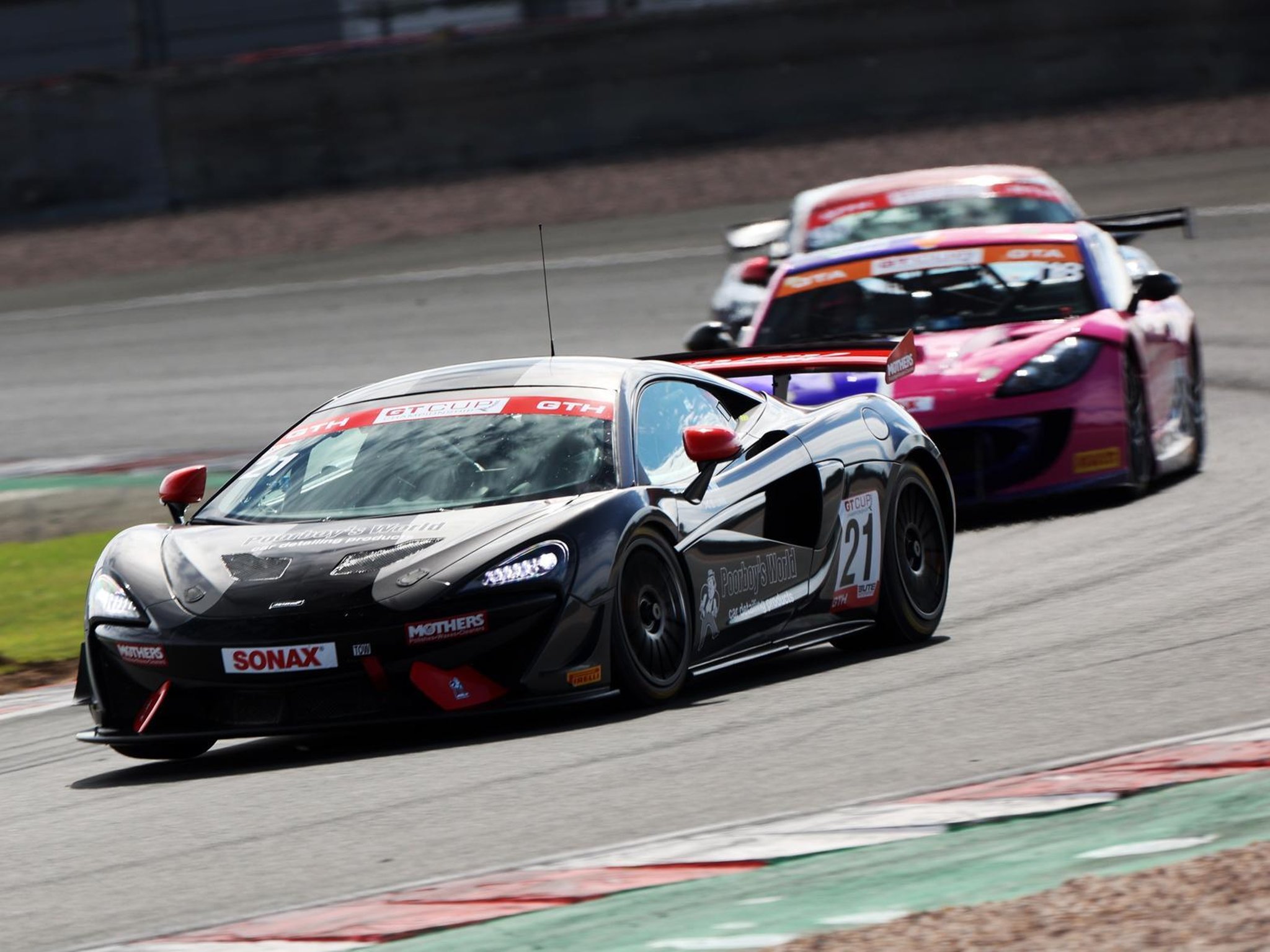 The Optiumum Motorsport team car on the Donington Park track.

It was a steep learning curve for the father-son combination as they competed in the highly competitive GTH class, making session-by-session gains to ultimately take the seventh checkered flag in the final race.

The duo tested their Poorboy’s World McLaren on Thursday ahead of their debut, with former rider Ginetta Ron charging with the harness on Saturday where he would qualify, compete in the Sprint race alone, and then start the Pitstop round. Quite a challenge against the regulars of the race in the series.

Sunny conditions greeted the teams and drivers on Saturday morning, but with heavy rain forecast for Sunday afternoon – which never arrived – Ron opted to lead much of the race on Saturday with Stewart taking over on Sunday.

Practice and qualifying saw Ron 14th in the peloton while in the sprint he gained a position early on with Carl Cavers who first fell back and found himself chasing Phillip Carter in the No 14 McLaren before finishing in 12th place.

Saturday’s Pitstop race started with a first lap of Safety Car, but once underway Ron found himself in a Ginetta sandwich, chasing # 6, while pushing # 118 from behind. He stopped on lap 17, passing the baton to Stewart for his first race laps of the weekend and he was able to earn a position to finish 11th on Saturday.

A downpour leading up to qualifying resulted in a wet session on Sunday morning, with Stewart setting the ninth fastest time. It was a relatively calm race at the start, but both laps saw impressive gains from Stewart as he passed seventh, then on the last lap chased the # 90 McLaren across the line in sixth position. A penalty after the race then promoted him to a nice fifth place.

The fourth and final race saw Stewart move up to eighth on lap one and on lap 12 he made his way to fifth place before handing the baton to Ron. Under pressure from the start, Ron avoided any potential danger to eventually bring the # 21 home in seventh place.

It capped off a good start for the duo, taking on drivers who compete in this championship week after week and while this event was always going to be unique, it certainly rekindled the racing spirit in both drivers.

Ron Linn said: “It was nice, especially in the second race on Sunday where Stewart gave me a huge advantage and behaved really well.

“If he was in the car regularly he could compete in front, so for me it was a pleasure to see.

“Optimum Motorsport has of course done a good job in preparing the car. I’m more used to showing up on a circuit with one mechanic for a day on the track somewhere, so a big thank you to them.

Stewart Linn added: “The car and we as the drivers got faster as the weekend wore on and we came here to have fun over the weekend with dads and boys. in the race and we certainly did it.

“We got into this without knowing where we would be and as we got rid of the rust we made progress. It’s the first time we’ve driven this car and it’s great to be part of the GT Cup. “

Shaun Goff, Wakefield-based Optimum Motorsport Team Director, said: and we’re so glad we were able to tick those boxes for them.

“They made gains in each session and were able to compete with the regulars in the championship, so we couldn’t ask for more than that!