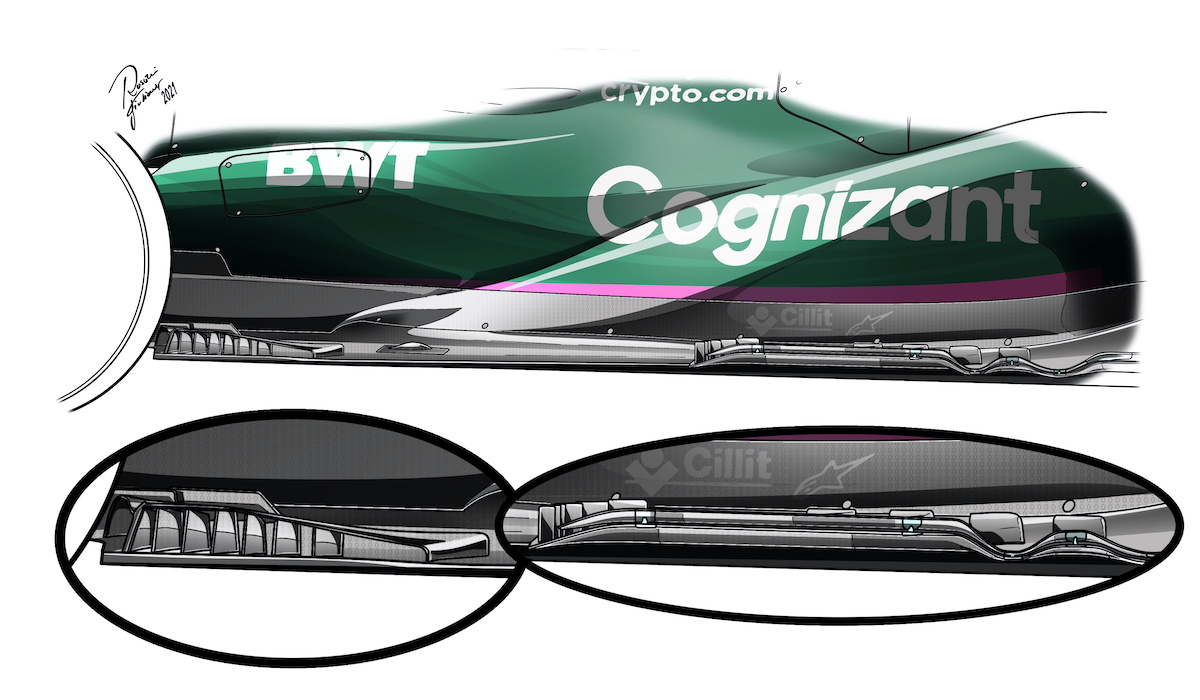 Aston Martin arrived in Austria for the second race at the same location with a big package of aero upgrades for its AMR21.

Aston Martin has had a somewhat disappointing season so far, if you compare it to last year. The car designed by Andrew Green did not live up to expectations.

The AMR21 fell behind Ferrari and AlphaTauri in terms of pace, while Sebastian Vettel took several races to get comfortable in his new car.

Last time in Austria – the Styrian GP – Aston Martin struggled through the corners at high speed, with a very nervous rear end, which Vettel struggles with. Stroll was tenth in qualifying, Vettel was 14th.

But this weekend they arrived with a major upgrade package aimed at fixing this issue, although there were plenty of updates in store for Stroll meaning Vettel will have to wait for the British GP in fifteen days.

New barges and a new floor weren’t installed on the Canadiens car until Saturday and they seem to have helped. Stroll was tenth and Vettel eighth, before his penalty.

The flow deflectors (arrows) have been revised in the central area, in an attempt to better laminate the air flow which is directed towards the ground. Small changes were also made to the upper part of the pontoon, to which three small flow conveyors were added to the horizontal canopy (single boom).

One of the main problems of Aston Martin is precisely that of not being able to generate enough downforce from the floor and the diffuser, which, as we know, was limited by the new 2021 technical regulations.

The AMR21 suffers even more from the problems Mercedes faced at the start of the championship, with a low-lean setup that suffered more from the rule changes.

The new floor seen on the Stroll single-seater has a different shape with regard to the vortex generators: The many vertical elements have been changed both in the central area, where there is the Z-cut and the wavy “lip” , and in the area in front of the rear wheels.

The engineers on the team are still trying to find a way to get the 2020 floor support back, so they can load more into the front of the car. On circuits where cornering downforce matters, the AMR21 seems to have more difficulty, compared to tracks like Monaco and Baku where most of the corners are at low speed.

To rebalance the settings, Aston Martin also introduced a new front wing, which both drivers used this weekend.

The new wing has simply been revised in the last shorter strand, on the inside, resulting in a larger chord than the old specification used in the Styrian GP. At Aston Martin, attempts are made to resolve understeer issues by also looking for downforce up front. One of the main problems that Sebastian Vettel highlighted is the lack of stability, which fails to generate sufficient downforce both in insertion (with understeer) and in traction (oversteer).

Like other teams, Otmar Szafnauer’s team looked for a more relaxed setup for the second race in Austria, trying to prioritize speeds in the first sector. In this regard, the two pilots tested two different rear wing configurations during testing. Vettel and Stroll both tried the spooned rear wing without the bridge wing, however, rejecting this choice for qualifying.

The difficulties in being able to release the downforce are obvious and unloading from the rear has also proven ineffective for tire management which is even more critical at the Spielberg circuit this weekend as Pirelli has gone a bit further on compounds.

Three anti-Prayut groups assemble and stage a 'crowd of cars'

Dewease wins "Jewel in the Crown" of Pa's Speedweek.